A volatile stretch of sea known as The Minch separates mainland Scotland from the Hebridean islands. Narrowing at its southern end, between Skye and my home in Wester Ross, it has a softer name: the Inner Sound. Here some of the deepest waters around the coast of Britain are sandwiched on their eastern side by the great mountains of Torridon and Applecoss, to the west by the island of Raasay and the forbidding walled ridges of Trotternish, and in the south by the mighty Cuillin range.

Atlantic weather systems, herded in by the open ocean, are funnelled between the mountains and islands often creating conditions uniquely different from the rest of Scotland. Oceanic influences are whittled and remoulded by this place. It is governed by wild elementals: thalassic, terrestrial and aeolian. Dominated by the interplay of light, air and water, the Inner Sound is a world of transition and migration, competing edges and conflicting powers, and a long history myth, music and storytelling. 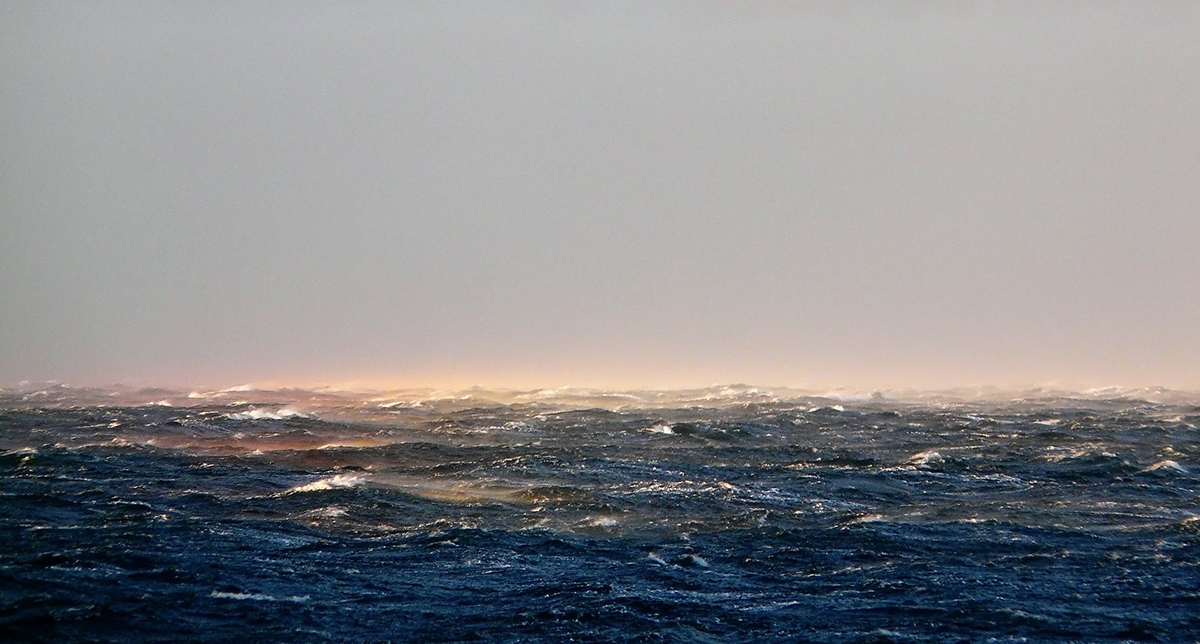 Looking out from home my view runs from the undulating volcanic ramparts of Skye past a ladder of islands from north Uist to Harris, and on to the northernmost Point of Ness on Lewis. I can trace my finger along an almost continuous line of smooth curves and serrated crests, the Inner Sound seeming like a basin cupped by the supine body of a mythical beast whose tail extends north and whose maw sips the sea water by Raasay. Our astronomical year can be mapped along its spine: from winter solstice by the Old Man of Storr to mid-summer solstice at the tail’s tip by Ness.

Here in Wester Ross the coast is rugged and ragged, notched by geos, caves and collapsed sea stacks. Shallow sandy bays sit alongside steep shingle beaches, washed in summer by pale milky sediment-filled waters and in winter by diamond-clear seas that bioluminesce under Northern Lights. Some of the oldest rocks on earth are found here: grey-green Lewisian Gneiss and peachy-red Torridonian sandstone. Eroded and winnowed by water, ice and wind they make up the sands and boulders on our beaches, the rock formations and contorted cliffs. Yet while the solid landscape speaks of deep time and unimaginable forces, the sea and weather dominate human emotion and sensation.  And in their dominance, they are as tortuous and bewildering as the serpentine landforms across the Sound, always changing.

My home is surrounded by wild country studded with lochs, rocky outcrops and peat bogs. There are few trees though pockets of ancient woodland exist here and there. Population density is low, settlements few; small farms known as crofts, often no more than a few acres in size, are dwarfed by sweeping wilderness landscapes as far as the eye can see. It is a place where wildlife finds refuge in spite of a long and troubled history of persecution. Sea eagles have returned, otters are plentiful and small birds thrive in the meadows and meads. And in the high moorlands and mountains deer roam, snow hares gamble and golden eagles hunt.

I moved here to live among the mountain wilderness yet my gaze is torn away from the peaks of Torridon. The Inner Sound is a magnetic neighbour, a fickle yet generous magician. I am lured by the sounds of waves and winds and by colours so rich and plentiful they are almost impossible to name. The sea is charged and changeable and reflects sunset flame or auroral neon back to the heavens. Songs of death and loss echo in deep aquamarine and cobalt blue storm waves while crystal-bright, lace-edged surf on a summer’s day usher in joy and jubilation. There is no day to match another; no colours or sounds are the same, and there are no rational feelings to accompany the onslaught of changing light and form. And like a junkie I rush to see what is being offered, never certain whether it is sea or sky or island earth that tempts the most. 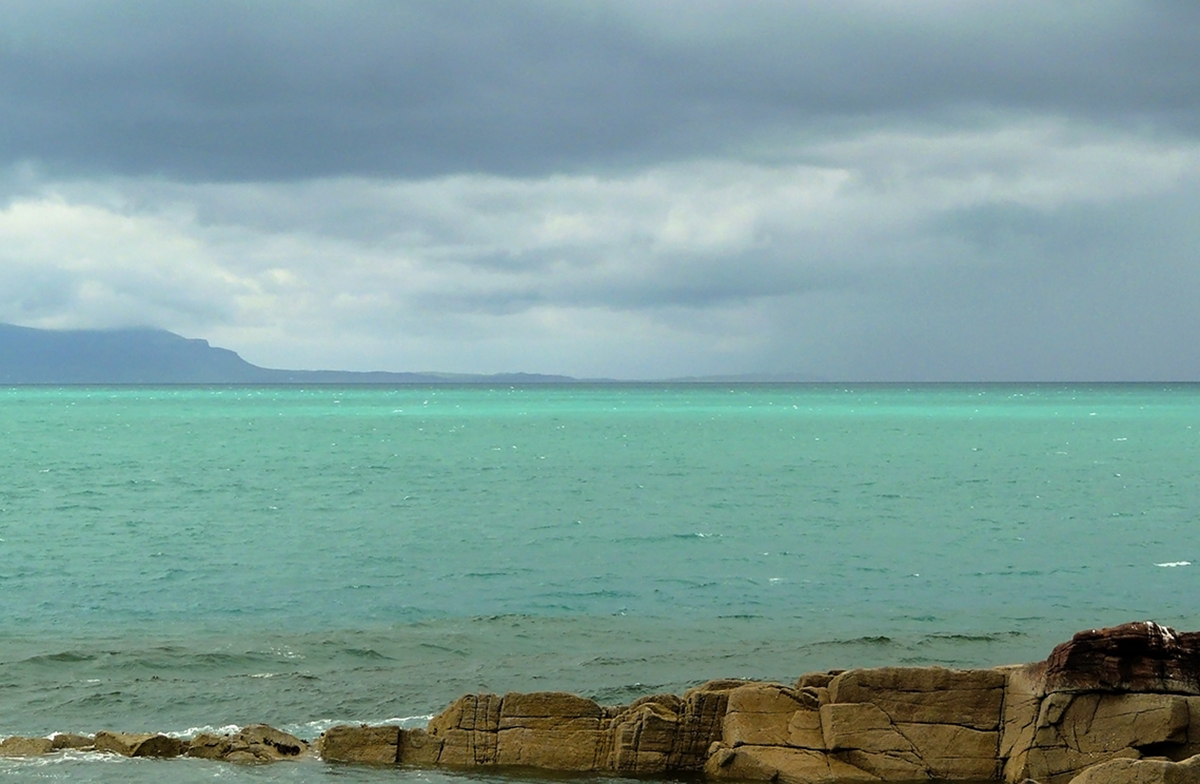 A narrow trail leads from the croft and down the cliff to the shore. The sky is vast and open. It is possible to see change developing over the ocean beyond the Western Isles: cumulus tops growing; feathered cirrus streaming; anvil shaped thunderclouds surging. Each day, at the cliff’s edge, I pause to take a photograph and steal a little of the magic. Then I believe what I’ve seen, the truth that is the Inner Sound, so I’m not hoodwinked by its shape shifting ability to twist and defy the logic of light and sound.

This precious space between my vantage point and the sea lures others too; it is a haven and a highway for wildlife, a banded edge-world that spans shallow marine kelp meadows and marl beds through the variegated intertidal zones of bladderwracks and shellfish, and on to luminous shore-side machair grasslands and thrift or lichen covered rock. In the spring and summer this wild coast ripples with wild flowers and hums with insects. Skylarks rise high, wheat ears and stone chats chitter from fence post to boulder; dunlin, sanderlings and ringed plovers mingle with oystercatchers, curlew and whimbrel; bonxies cruise overhead; and off shore, as gannets plummet, divers, shag and cormorants pass back and forth.

On a bright mid-summer’s day the Inner Sound can be a place of azure skies and turquoise seas. Islands vanish in haar and haze to reappear as strange ships floating on a sea made of satin and silk. As the sun sets blues become orange and apricot, the sea fills with molten gold streaked with quicksilver, and the dragon-beast across the water slowly fades into purple shadows and whispers.

When Atlantic winter storms blow in the waters are stirred up and roil. Waves build and roar, agitating sediments and tearing at seaweed roots; they bring the detritus shoreward in heaving, tangled rolls. This place is ferocious then, the Inner Sound is no longer gentle but dangerous, angry and shrieking. And inside it we become deaf to the rest of the world.

I understand now the naming of this place. It was moulded by enigmatic geologic forces over aeons and yet is an entity of flux and metamorphosis, resonating with energy and vitality derived from air, light and water. Charged with colour and music, fierce and uncompromising, it offers home and sanctuary to a great variety of wildlife. The Inner Sound is organic and organismal, with a voice and presence of its own, and I can feel the deep quickening tug of it in my dreams. It is both life giver and life taker. And it has captured mine. 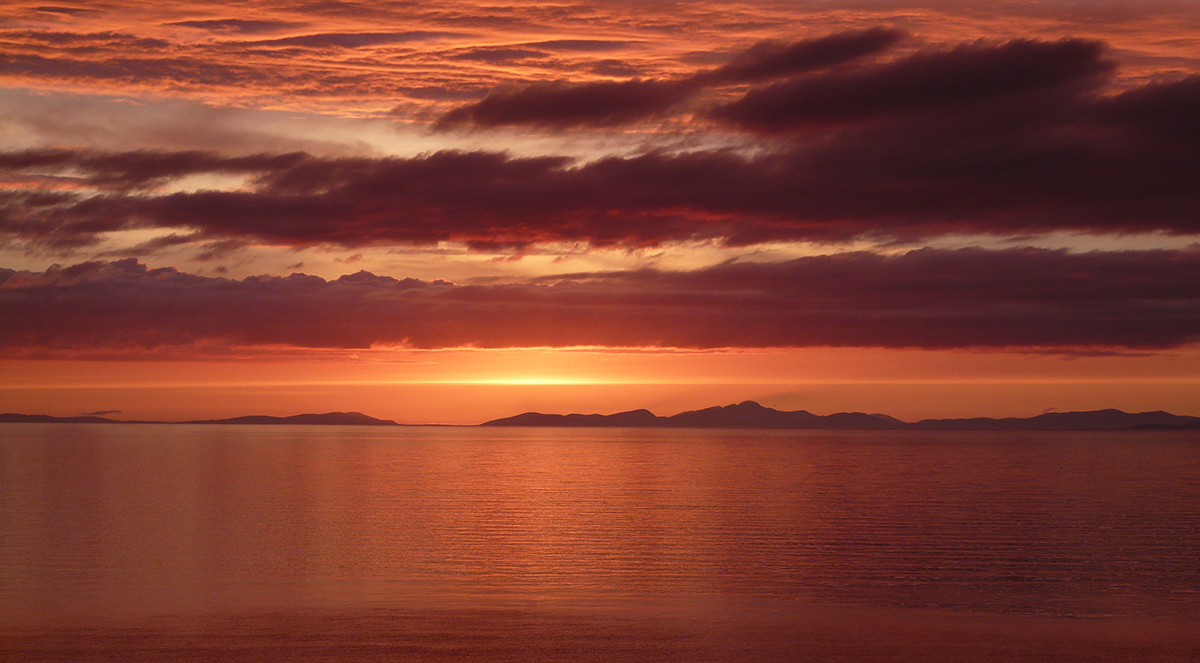